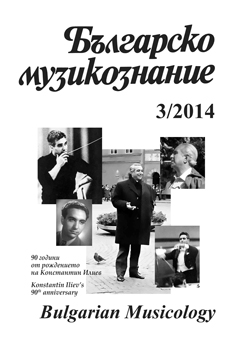 Summary/Abstract: At a political level, multicultural­ ism is deemed to be a utopia, but the processes of its establishing after the 1960s-defining, developing a methodology, integration in the legal and educational systems- have had their effects. In the memorial music following the First World War, multicultural thinking is an established fact. Through combining and placing diverse cultural lexical and music symbols in an environment of mutual substitutability, of equality, where they develop harmoniously in parallel, Alexander Kastalsky’s Requiem for Fall­ en Brothers anticipated the formula bequeathed by Karlheinz Stockhausen, according to which the overriding priority of our time is to preserve as many forms and manners of performance as possible so that to allow for hearing the vibrations showing themselves in forms in thou­ sands of different ways. In such a light of the idea of multiculturalism, using the parallel analytical approach between Kastalsky’ s example and later pieces of compositions of requiems for the victims of violence (incl. the requiems by E. Firsova, V. Artemov, K. Penderecki, J. Wallmann, etc.), the common traits but also the individual specifics are traced as well as some steady models such as intertwining quotations or paraphrases of the Dies Irae sequence; quests for the associative sonorous effect of campanology; implicit or explicit vision of theatricality; striving for comprehensive synthesizing of obvious national symbols; inclusion of poetic sources and their interweaving in the context of the canonical text of requiem; development of detailed concepts and theoretical argumentations, accompany­ing the compositions and showing clear pacifistic social messages; references to the canonical form and structure of requiem. The music observations are furnished with examples of scores and at times are argued with referent philosophical and anthropological views such as those by Samuel Huntington and Hans Ulrich Gumbrecht. The observations and conclusions map out the contemporary memorial music, particularly that of the requiem compositions, creating preconditions for further profound approaches and analyses within this field of the twentieth- and twenty-first-century music.