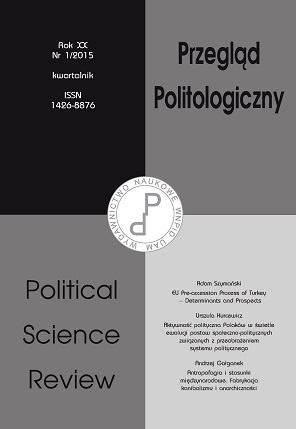 Summary/Abstract: The Alternative for Germany is a new party on the German political scene. Despite a short political and media history (established in February 2013), the party managed to strongly mark the socio-political space with its presence, mostly because of its anti-establishmentarianism. AfD is also sometimes called a „professors’ party”, as its members and followers stem to a large extent from so-called intellectual circles of science, politics and economics, and are reputable experts for many fields. AfD provoked a major imbroglio during the last parliamentary election in Germany (2013). It gathered 4.7% of votes, standing very close to the electoral threshold. It is however commonly disregarded by activists of most of the other parties in Germany. The aim of the article is answering the question: given the above, what was the crucial factor for building up such relatively high electoral result (inches from bestowing mandates) in this very short time? Is it the social, programmatical, or rather media potential, created mostly on the web? Which of these elements brought the AfD 7% of votes in the election for European Parliament 2014?