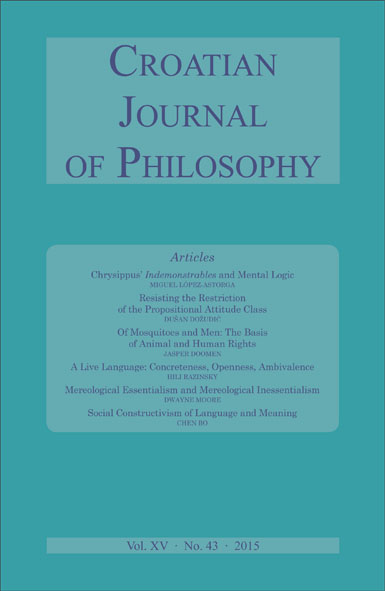 Summary/Abstract: To systematically answer two questions “how does language work?” and “where does linguistic meaning come from?” this paper argues for Social Constructivism of Language and Meaning (SCLM for short) which consists of six theses: (1) the primary function of language is communication rather than representation, so language is essentially a social phenomenon. (2) Linguistic meaning originates in the causal interaction of humans with the world, and in the social interaction of people with people. (3) Linguistic meaning consists in the correlation of language to the world established by collective intentions of a language community. (4) Linguistic meaning is based on the conventions produced by a language community in their long process of communication. (5) Semantic knowledge is empirical and encyclopedic knowledge distilled and condensed, and the uses of language accepted by a linguistic community. (6) Language and meaning change rapidly or slowly as the communicative practice of a linguistic community does. The crucial point of SCLM is to focus on the triadic relation among language, humans (a linguistic community) and the world, rather than the dyadic relation between language and the world.