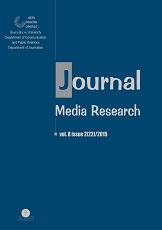 Summary/Abstract: The role of media is highly important in regards to violence against women, both in terms of how media cover the issue, and how media may become a tool used by activists and decision makers to raise awareness, mobilize people and implement programs on the issue. Even if the relationship between media, public opinion and policy is complex, we know that media coverage matters and so does the construction of a problem as they both may give voice or silence perspectives and people. Violence against women (VAW) generated public protests in Romania starting with 2000, mobilized women’s rights/feminist groups to advocate for legislation and policy development. In September 2011, a commercial TV Station launched a raising awareness campaign questioning the adequacy of public measures addressing VAW, thus backing feminist activists. Media further on supported activists during a 25th of November protest in front of the Parliament, aiming to sanction MPs for refusing to pass a bill including the order of protection. At the same time various researches revealed mass-media reflect sensationalist and spectacular depictions of violence against women. It is in this complex context of media covering VAW that the article explores and explains “the strange media case of Dr Jekyll and Mr. Hyde”.