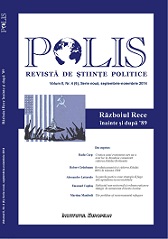 Summary/Abstract: During the four decades of the Cold War, the Eastern and the Western military-political blocks have developed manicheistic ideological projections to justify their antagonistic position. From a historical point of view, the first doctrine of this type belonged to Stalin who theorized on “the capitalist encirclement”. After 1945, it was the Americans turn to develop an anticommunist ideology – the Truman Doctrine (the containment policy). As a response to the western “containment” policy, the Soviets launched the Brezhnev Doctrine which was based on intervention and export of revolution. As The Helsinki Final Act did not result in a real improvement of the East-West relations, the USA reconsidered their policy regarding the Soviets, adopting the Reagan Doctrine (strategic initiative also known under the name of “Star War”). The crisis registered by the Soviet system determined Kremlin to abandon the expansionist projects at the end of the Gorbachev period. The end of the Cold War was ironically and symbolically accompanied by the sound of a famous Frank Sinatra song: “I Did It My Way”.