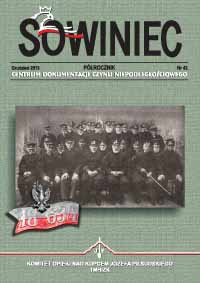 Summary/Abstract: The murder of priest Jerzy Popieluszko, perpetrated by teh officers of the Security Service (Sluzba Bezpieczenstwa), had far-reaching social and political consequences in the People's Republic of Poland. The perpetrator's trial was of equal importance. The trial was staged by the communist authorities in such a way that those who commissioned the murder could not be traced. The article aims at analysing, on a few examples, how the priest Popieluszko's murder was received and what the far-reaching repercussions were, from the perspective of opinions by selected people from the Krakow region.