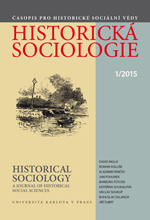 Summary/Abstract: This study deals with historic cultural contacts between Europeans and the Benin Empire, one of the most significant native African cultural centres between the 15th and the 17th century. The study focuses particularly on the development of the Benin Empire on the background of acculturation and diffusion of European cultural elements and complexes. The study describes the first contacts between Europeans and the Benin Empire and the subsequent business activities, including slave trade. Special attention is paid to European colonial expansion that culminated in the 1897 British invasion which led to the conquest of the Benin City. The aim of the study is to draw attention to the role of the exogenous cultural change and acculturation processes, which caused the fall of once a socially, economically, politically and culturally stable African empire.