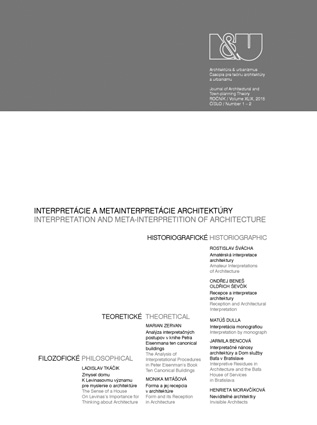 Summary/Abstract: The significance of historic events is never unequivocally clear, but instead always subject to change along with the methods of their understanding. In every era, the problem of producing historiography invariably rises again and again, and thus history always needs, in a sense, to be rewritten. Even art history cannot interpret a work of art in an ahistorical sense “in and of itself”, but always brings to its interpretation its own preunderstandings. The explication-interpretation of any work has been brought into philosophy in connection with the revival of the problem of hermeneutics by Arno Azenbacher. Against the interpretation of explications and events, Anzenbacher understands it as the interpretation of facts that emerge from the individual narratives of the human life. Hence the precursors to the interpretation of a work leading towards its understanding must be great in number. According to Hans-Georg Gadamer, conditionality on history is not a loss, but a gain: always the meaningful posing of questions that predict the future. And this is true even though the individual “pre-step” of the interpretation is often a different understanding. “Difference” thus in essence grounds a critical view of the interpretive approaches, which in turn stimulates the new asking of questions, the openness and indeed the endlessness of the interpretive problem. Historiographic interventions into the interpretation of works in the past invariably came up against disputes that cast doubt on their justifiability and legitimacy. Art criticism and art history form a kind of eternal return to the work – the subject of cultural history, to its origins and anchoring, as well as to its evaluating, investigating and receiving subject. Here, though, there start to appear the serious doubts of the ability of mere historical understanding of a work and the possibility of its exhaustive explication. Indeed, Umberto Eco directly indicated the excess of interpretive results as the danger of “overinterpretation” of the work. On the opposite side, every interpretation should have a foundation in the reconstruction of the intent or the intellectual basis of the creator, of his or her authorial strategy, hence with the necessary presupposition that the work is simultaneously the expression of a certain mental phenomenon – a thought or idea, conception, belief, program, ideology, conscious or unconscious, personal or collective reflection. Most notably, in the realm of postmodern art or architecture, the openness of the interpretation of a work could appear an illusory or doubtful “interpretation abrogans” and in essence wrong – though even this could itself be an intention or an interpretational game. To cite Peter Lamarque, it is possible to raise, in opposition to the classical “discovering interpretation” an alternative form based on the differentiation between the physical and the artistic object or human artefact. In addition, there appears a third object, ...