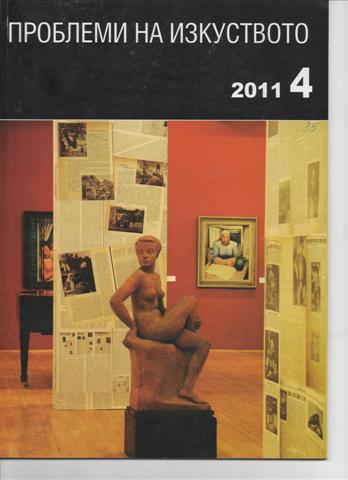 Summary/Abstract: The article focuses on a moment of Boris Elisayev’s life and artistic development, but also on an interesting episode of the history of Bulgarian art abroad. It points on a Bulgarian event in New York which should not be one of many manifestations of cultural exchange between Bulgaria and usa right in the face of coming WWii. it is the “all-bulgarian exhibition” which was opened on the 23th of January 1938 at the Gallery Fifteen. The bulgarian painter Boris Elisayev arrived in the usa in July 1937 with his wife, the american arline al- dridge, whom he met the year before in Warsaw and whom he had married in Bulgaria. He found appreciation in the american art world and many of his works have been showed at a vari- ety of exhibitions at The art institute of Chicago. Through the Bulgarian exhibition in New York later some works by the artists Ivan Nenov, Vasil Zakariev and Veselin staikov were included in the 5th international Exhibition of Etching and Engraving. The Bulgarian exhibition as an example of an american-bulgarian dialogue could be helpful for tracing the Bulgarian and american processes of alignment to modern European art and its perception in during the 1930s.