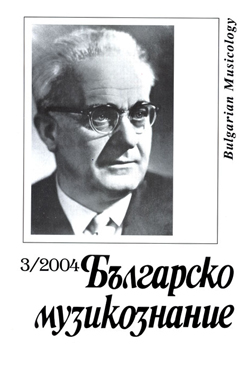 Summary/Abstract: In the last decade of XX c. and at the start of XXI c. in the sphere of mass culture in Bulgaria another musical and entertaining phenomenon, the so-called pop folk hit gained recognition. Although it is in song form, it is related in geme to the chalgia from the National Revival period (an artifact of the traditional urban instrumental practice studied by E. Valchinova-Chendova) and it even borrowed its name modifying it to chalga. Representing in fact Balcan ethnopop­ music, the chalga is characteristic for that contemporary popular World music, in which despite the leading globalization tendency -the local (“vernacular”) is the dominating factor, marking the product, attracting mass audience. According to the author, the ethnopopmusic marked by eroticism and Orientalism is not an isolated phenomenon in Bulgaria’s culture. It is an extreme manifestation of that line in the dynamics its artistic culture, for whose definition Statelova borrows the expression e.g. “indulgence in elemental dissipation” from the social anthropologist Haralan Alexandrov or “loosening of the lower part” from the drama expert Violeta Decheva. The subject of studies is always constructed in this way - by referring to public statements of humanitarians (experts in art, culture, political science, etc.) selected by the author. They join in a seemingly united “correspondence” debate on various topics whose discussion, however, leads to the same after all: discussion of the trauma called living in Bulgaria. This trauma is survived diachronically: once as the past (a myth like memory of the centuries-long Ottoman domination on the Balkans) and after that as the present (the transition period after 1989 regarded as catastrophic). The attitude to the ethnopopmusic and the attitude to life in Bulgaria are encountered in the reflexive category revulsion, an attempt of theorizing it being made in this paper.