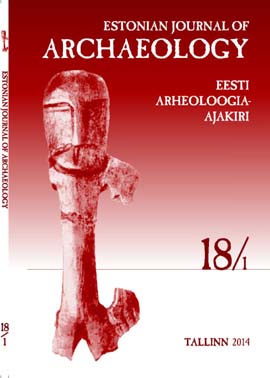 Summary/Abstract: In 536–541 AD a short-term and sudden cooling took place in the northern hemisphere. Archaeological and palynological data reveal that this event caused crop failure and demographic catastrophe in what is today Estonia. It took until at least the end of the 9th century to return to the previous population level. As a result of this crisis, previous power relations, trade networks, and handicraft traditions were disrupted, settlement structures transformed, and the entire world view of people changed. The climate catastrophe may have influenced the development of agriculture in Estonia. One can assume that the predominance of rye cultivation in Estonia in the second half of the first millennium is a result of the climate anomaly of 536–537. In Finland, where hunting and fishing were the main livelihoods and thus land cultivation was of marginal importance, the climate catastrophe does not show in the archaeological record as a decrease of archaeological finds as it does in Estonia or eastern Sweden. One can, though, observe disruptions of the previous trade networks due to the events of 536–541 and the formation of new ones. These changes had an important role in forming both the unique material culture of the Finnish Merovingian Period and in expanding land cultivation in the area of southern Finland during the next few hundred years. The impact of the catastrophe of 536 was so substantial that it could be considered an important threshold in the Estonian archaeological chronology. It is then that the greatest cultural upheaval since the major changes between the Early and Late Bronze Age are visible. It would be appropriate to set the border date between the Migration Period and Pre-Viking Age approximately in the year 550.