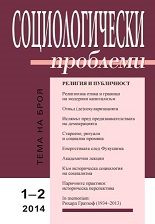 Summary/Abstract: In March 2011, Syria was shaken by a series of demonstrations that gradually grew into a civil war. Hundreds of thousands of Syrian citizens, with or without official documents, through official border points or through illegal channels, left their native country and became political refugees. The impact of immigration waves was strongest on the bordering states - Lebanon, Israel, Jordan, Iraq and Turkey. The article presents the problem in one of its regional contexts, focusing both on the politics of the Turkish state towards refugees and on the various media images of this category of people.