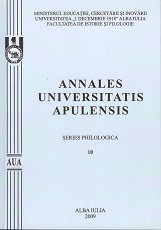 Summary/Abstract: This article explores the circumstances and the motivations behind the connections between the Romanian Humanist, Nicolaus Olahus, secretary of Queen Mary of Hungary with Erasmus of Rotterdam. The friedship between Olahus and Erasmus is often mentioned in the Romanian historiography, but a detailed analysis of the relationship between these two intellectuals was needed. The examination of the primary sources (30 letters, written in 1530-34, are extant) and of the recent scholarly literature has allowed the following conclusions. The connections between Olahus and Erasmus were preceded by earlier attempts of attracting the Dutch humanist in the circle of Queen Mary of Hungary. As the historiography concerned with the Queen Mary’s life and politics has pointed out, Erasmus and his works were discussed and admired at Buda, in the presence or by persons attached to the royal household. Before Olahus started to write to Erasmus, a previous counselor of the widow queen, Joannes Henckel, tried to attract him in the circle of the queen. Moreover, the invitations to join the household of the queen before and during the Diet of Augsburg, and later, while the queen was regent of the Low Countries, strengthen the conclusion that behind Olahus’ contacts with Erasmus were the interests of Queen Mary. There is a genuine admiration and sincere appreciation in the letters of Olahus, who did his best to entice Erasmus to return in his patria. However, his rhetoric skills and even political influence were not sufficient to convince Erasmus to accept the protection of the queen’s household. Olahus was valuable for Erasmus due to his influential position, which allowed him to wield some favors for his protégés. Olahus in return benefitted from the recognition and honor of becoming one of the friends of the great humanist.