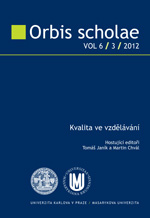 Summary/Abstract: The article deals with content analysis of articles on national testing of 5th and 9th class pupils in the Czech Republic, published in three major daily newspapers (Mladá fronta Dnes, Lidové noviny, Právo) in the period between January 1st 1990 and December 31st 2011. The total number of researched articles is 121. The content analysis was conducted by a codebook, prepared in advance by authors. The analysis showed that the tone of the articles is in 40,5% of cases positive, in 36,4% negative, in 8,3% ambivalent and in 14,9% neutral. However, the number of articles whose tone is negative increased noticeably in the period 2010−2011 (in 2004−2008 it was 25,6% of cases, while in 2010−2011 it was 42%). The number of articles mentioning the risks of national testing also increased in the course of the time (in 2004−2008 it was 20,5% of total number of articles, while in 2010−2011 48,1%). The analysis also revealed that only 18% of articles link the launch of the national testing with a more general aim, which should be achieved through testing. Only 19% of the total number of articles mentions at least some foreign experience with testing. Generally, the media image of national testing is rather contradictory, technically-oriented and with insufficient discussion of a broader context of testing.