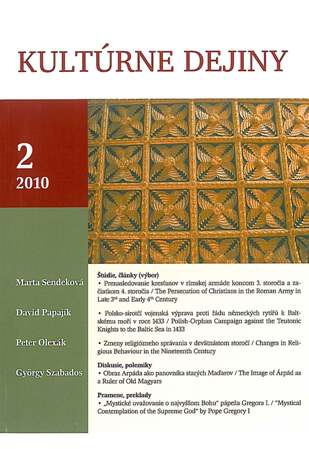 Summary/Abstract: In 907 two important events of the medieval Central European history happened. The monarch of the Hungarians Árpád died and the army of the East Frankish kingdom was defeated at Bratislava on July 4th and 5th. Although both of these events are the chapters of the Hungarian Conquest, there is no direct connection between Árpád’s passing and the battle. At first the data bases are absolutely different: Árpád’s last year was mentioned only by Gesta Hungarorum (The Deeds of the Hungarians) written by the anonymous notary of king Béla III. However, this author did not give an exact date within the year 907. Moreover the memory of the battle of Bratislava had not been saved in Hungarian chronicles, only external sources tell the fact of the fight. My study gives a review on the background of the double actuality of 907. There are several seriously discussed points of the Hungarian Conquest. One of them refers to the introductory events: who was the first Hungarian monarch? Árpád or his father Álmos? The home tradition declares Álmos, on contrary Emperor Constantine VII asserts Árpád to be the first ruler of the Hungarians in their earlier territory called Etelköz. After an almost 250 years old discussion we can be sure that the home mem-ory was right. Álmos established a heathen Hungarian state in Etelköz and Árpád led the people into the Carpathian Basin. There are two opposite opinions in the written sources on the circumstances: some of them regard the immigration as a victorious conquest, some of them tell that it was a runaway after a massive defeat. The decision is in the military history: the Hungarian fighting activity was so strong at the turn of the 10th century that the theory of the runaway can be denied. Many raids and victories are mentioned in the external sources before and after 907, and within this process the battle of Bratislava is an important focusing point. The last part of this paper deals with the development of Árpád’s image. The ancient chronicles do not tell us much about his deeds. The anonymous notary re-interpreted his figure according to the spirit of chivalry. As his Gesta Hungarorum had been discovered and published in 1746, it strongly influenced the historical thinking. His imaginary Árpád suited the awakening national romanticism, therefore a new hero was born in the epic poetry in 1825.