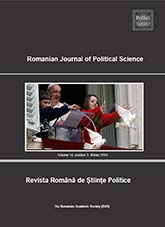 Summary/Abstract: Based on the presumption that the public attitude towards security issues can be measured by analyzing certain public opinion survey variables, we have tested selected variables from the Slovenian Public Opinion Surveys on National and International Security (from 1990 to 2012) against the basic postulates of the Political Realist, Liberal, Constructivist and Critical Security theoretical paradigms. The public attitude towards security related issues (i.e. threats, values, security concepts and policies, national and international security mechanisms and instruments) has proven to be peace oriented over the past decades. Hence we assumed that it can be best explained by Critical Security theories and Constructivism. We have developed a model in which the general theoretical concepts (expressed through attitudes towards threats, values, security concepts/policies, and security mechanisms/instruments) are complemented with variables from the public opinion surveys in order to analyze the general public’s propensity towards these various theoretical paradigms. Our analysis reveals that the attitude of the Slovenian public to the selected security issues can be best explained by Critical Security theories, and also to a lesser extent by Liberal and Constructivist theories; by contrast, traditional Political Realism offers little explanatory potential.