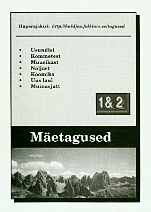 Summary/Abstract: The basis of wider distribution of choral singing among the country people was established at school and in the church. At the beginning of the 1930s, the development of polyphonic choral singing started. The example of choral singing as a form of social activity was taken over from the Baltic Germans among whom a movement of choral societies cultivating polyphonic men- or mixed choruses was widespead on direct influence of German culture. In Germany it was one expression of the national need of Germans to become one nation. In Estonia, in Põlva already in 1855 and 1857 several choruses performed together on what was called a "song-holiday", but the first song-holiday of a county that had a wider response was organised by the local priest Martin Köber in 1863 in Anseküla, where 500 singers participated. In North-Estonia, the first song festival was held two years later in Jõhvi, and in June 1869 the first Estonian nationwide song festival was held in Tartu after two years of pursuing a permission from the authorities. It has been even claimed that Estonians sung themselves into a nation. Since then, song festivals have regularly been taking place. The song festival is a folk festival, being at the same time both a ritual and a spectacle. The song festival creates a situation where cultural identity and national unity can be demonstrated. The mechanism of this festival is social mobilisation, people come to the festival with their families and friends, more important than the choral experience is communicating with those from close and afar, the need to experience reblendation into the society in a wider sense, the sense of unity with the nation, its history and cultural heritage. Artistic organised performances taking place during the festival that are aimed at the audience demonstrate cultural devotions of the particular community, carrying at the same time three main purposes: the social function to organise the community; the psychological function to express personal and collective emotions; and thirdly, the function to expose, strengthen and create the particular culture (Turner-McArthur 1990, 86).