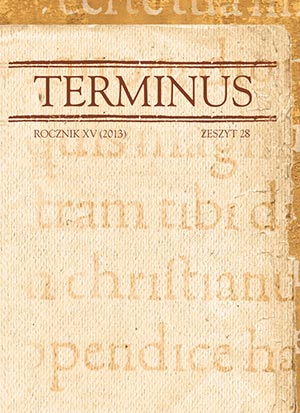 Summary/Abstract: This paper shows the personal reflection of its authors upon the methodological contexts of cultural and literary studies concerning Old Polish literature. Especially those contexts that eagerly and sophisticatedly – though quite superficially – apply the so called “modern” literary theories to the analyses and interpretations of Old Polish texts and – at the same time – disregard their very historical backgrounds. The authors present a fairly sceptical approach towards the blind and unjustifiable, although fashionable, application of “modern” criticism in the given field of research. Instead they emphasise the contextual, secondary character of the possible modern theoretical implications, as well as the particular, specific character of Old Polish writings. Moreover, wider social factors influencing the methodological decisions taken by the academic community in question (who undoubtedly still favour the traditional, philological method of research and strongly distances itself from the contemporary theoretical thought) have been discussed in great detail. The enclosed analysis of the recent controversial book Fantomowe ciało króla (The Phantom Body of a King, 2011) by Jan Sowa, which deals with the Old Polish history, society, and culture, strongly influenced by the application of modern criticism, in particular the postcolonial part of it, served both as an example of the authors’ argumentation and, at the same time, a warning.