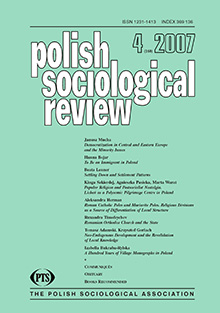 Summary/Abstract: The aim of this article is to present some ramifications of the democratization processes in Central and Eastern Europe (CEE) since 1989. The analysis concentrates on relations between the new dominant groups and cultural (mostly national and religious) minorities. The author outlines the concepts of democracy under conditions of cultural pluralism. He concentrates on similarities and differences between three levels of relations between the dominant groups and minorities: “institutional,” “semi-institutional,” and “non-institutional.” CEE is not homogenous neither among the countries nor among these spheres. Moreover, relations between dominant groups and minorities do not seem to be much more complicated than in some (actually many)Western countries. However, it seems to be easier in CEE to express oneself on political and cultural maters without fear of governmental reprisal than without fear of societal reprisal.