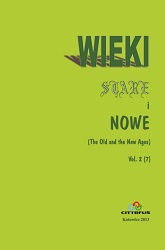 Razem czy osobno? Narody zamieszkujące Wileńszczyznę wobec perspektywy samostanowienia po I wojnie światowej (do początku 1920 roku)
Together or alone? Nations inhabiting Wileńszczyzna and the perspective of self-determination after the World War I (till the beginning of 1920)

Summary/Abstract: The occupation politics of German authorities during the World War I led to a revival of national movements in the territory of the former Grand Duchy of Lithuania. In the final period of war the aspirations of the elites from particular ethnic groups aiming at building their own state organisms became the source of the conflict. The object of rivalry was Vilnius and Wileńszczyzna. The Lithuanians aimed at building the nation based on the domination of culture and the Lithuanian language with the capital in Vilnius. They were against the federation with Poland. They received support of the part of Jewish politicians for the price of the promise to introduce the national-cultural autonomy, although the Jews from Vilnius were in favour of the conception of the ethnic, not national state. The Polish community was divided. The minority constituted the advocates of the reference to tradition of a multinational Lithuanian state in which different languages would be justified and the restoration of the relationship of Poland and Lithuania would constitute a protection of the laws of the Polish culture and would create a potential able to resist danger on the part of Russia. In the Polish camp the idea of incorporating Wileńszczyzna with Vilnius into Poland dominated. The Belorussian elites were in the most difficult situation, wanting to build the nation covering both the part of Wileńszczyzna and Minsk. Unshaped national awareness of Belorussian masses and lack of a broader class of intelligentsia forced the Belorussian activists to search for the external support on the part of Russia, Poland and Lithuania. However, each of the neighbouring countries had territorial businesses which collided with Belorussian aspirations. The advocates of Piłsudski, editing “Nasz Kraj”in 1919 in Vilnius regarded a multinational Lithuania combined with Poland by means of federation as the only chance to unite contradictory programmes. They did not manage though to reconcile either Lithuanians or Belorussians or even the majority of the Polish society in Vilnius for the very conception.