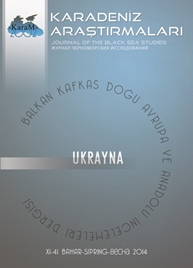 Summary/Abstract: The regional crisis began in 2013 in Ukraine has turned into an international one with Russia's annexation of Crimea. Ukraine-Crimea based recent events happened in the context of Black Sea geopolitics continue to show strong signals of a coming period of change. In the sense of "Colorful Revolution" period, revolution/coup or counter revolution/counter coup processes, broke out firstly in Georgia in 2003, and then continued in Ukraine in 2004 have led a serious a state of failure between Russia and the West. Expectations that a new Cold War may start alongside the breakup are quite high. Russia based statements that claim referendum in Crimea as the "end of the unipolar world" displays we'll talk about a different world after March 2014. Therefore, in this work, firstly background of Ukraine-Crimea crisis, roles of the sides, and expectations from the crisis will be dealt, then possible effects of the crisis on regional politics and international system which is under construction will be analyzed. Moreover, a comparison with 1853-1856 Crimean War will take place and suggestions about Turkey's place and its possible policies towards the crisis will be presented.