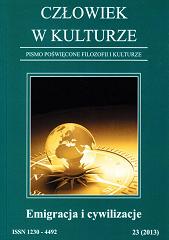 Summary/Abstract: The undertaken considerations are focused on the problem of brain drainage. They are concentrated on following questions: what is the brain drain phenomenon, what is it caused by, and what is it specified by in the era of globalization? In the light of the performed analysis it is found that (a) discussions on the brain drain phenomenon result from the awareness of a significant role which is played by highly educated social elites in the properly functioning state; (b) the brain drain is usually seen as a negative phenomenon; only its temporary form can be combined with possible benefits for the state; (c) the ultimate cause of the brain drain phenomenon is a violation of social justice: the lack of honesty in relations between states (deliberate brain gaining), between a state and its citizens (culpable brain wasting), or between a citizen and his state (excessive ambitions); (d) the attempt of solving the problem of the brain drain phenomenon by promoting brain exchange or brain circulation options can be successful only on an economic level, the domination of the globalization based on economic trends seems to be a serious threat to the cultural identity of individual countries and their citizens.