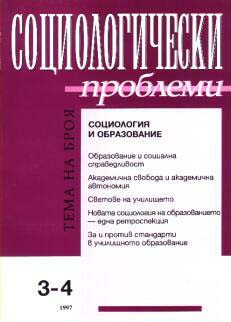 Summary/Abstract: The paper deals with the existential need of history thematized by intellectual discourse in that particular time and place that we designate by the term "postcommunism". The analysis is structured in four parts. Part one dwells on the "surplus production' of history by the political communist discourse which did not have meaningful translations on the level of everyday consciousness. The latter conceived of postcommunism as enchantement with history. Part two starts with the end of history concept introduced by Fukuiama. The analysis outlines three different conceptions of history in humanitarian discourse over the past few years. One operationalized history in "hard" indicators such as industrialization, hired workers, capital, parties, concentration camps. In the other view, the ontology of history is an integral part of productive imagination as an a priori form consuming historical reality. In the third view, historical reality does not exist independent of and beyond the mode of its narration. The concept of historicism is the key one in the third part. Critical objections to historicism are expounded — for instance, to its covert teleology and the nomination of "initiated", of "elites" who know the truth about history and could foresee its course. A theoretical alternative to historicism is examined: "territorialization". The purpose of the latter is not to underrate the becoming but to appreciate the environment: not to replace history but to purge it from cult of necessity. The final part concludes that rewriting of history as multiplication of theoretical concepts through which one analyses it is already a fact, while, rethinking of historicism as recognising its epistemological premisses and limits still lies ahead.