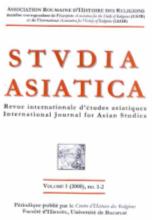 Summary/Abstract: This study continues the project of our investigations that try to include the whole area of the relations between Romanian culture and the Asian space, taking in account the oldest medieval testimonies and continuing through until the documents of contemporary history, which may be considered the promoters of the first Oriental studies. According to the first evaluations of our study “The Image and the Memory of Asia in the Romanian Culture (1675-1928)”, Archævs. Studies in the History of Religions II (1998) - III (1999), p. 213-449, we have tried to focus in a deeper way the relations between the literature of Asian interest, from the second half of the century and the oriental writings of Spathary Nicolas. The works of Nicolaus Trigauti and Martinus Martini, J. Nieuhoff and Adam Olearius, Alvarez Semedo, the entire work of Pater Athanasius Kircher and the Asiatic epistolary of Leibniz shows the religious, economic, social and politic role of the discovery of Siberia and China. Leibniz’s Novissima Sinica (1699) that also contains Brevis Descriptio itineris Sinensis a Legatione Moscovitica anni 1693. 94. 95 confecti, emendatius edita, is one of the principal attestations of Leibniz’s constant interest for the relations with Asia promoted by Jesuits, ambassadors and travelers. In the context of this difficult and long process of the integration of Asian memory, the other partner, the Spathary Nicolae 'Milescu' represents, in a way that has never been enough explored before in the Romanian historiography, starting with B. P. Hasdeu, N. Nicolaescu, N. Iorga and especially with P. P. Panaitescu, G. I. Constantin, P. Cernovodeanu-O. Cicanci, Şt. S. Gorovei, and finishing with the recent monograph of R. Şt. Vergatti.