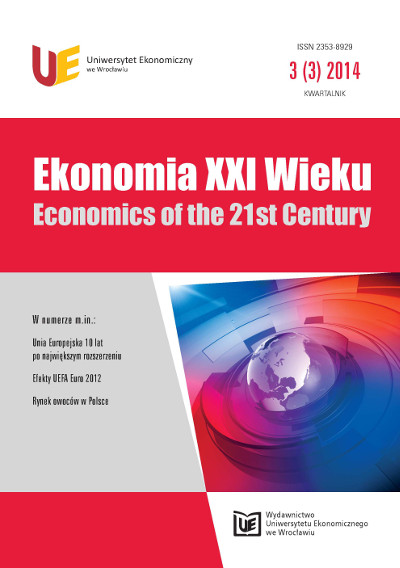 Summary/Abstract: In this paper we present the economics imperialism as an attempt to unify social sciences to the theory of economics. We show a lot of definitions of this phenomenon which are proposed in literature, but we point out that to some extent all highlight the issues of crossing of traditional boundaries of economics. Therefore, the definitions often accentuate an aggressive character of this process. In the next step, we present factors which allowed the emergence of the economics imperialism, such as the definition of economics proposed by Robbins, definitions of other social sciences and political factors. However, in the opinion of lot of researchers it was the unification of the science idea, as one of the “purest” goals of the scientific theorizing which was the most important. The influence of the last factor was reinforced also by the failure in finding of microfundaments of macroeconomics, that means internal unification of the economics. Trying to find an evidence of their advantage over heterodox schools, orthodox economists using tools, assumptions and methods which were characterisitc for them, started to analyse different non-market behaviours of people. We also distinguish two criteria of economics imperialism division. The first criterion concerns the subject of research or, in other words, a level of an analysis, so we distinguish the “into” and the “outside” economics imperialism. The aim of the “into” economics imperialism is to depart from traditional economic units and the analysis what these units are composed of and how they function, whereas the “outside” imperialism studies the phenomena of making decisions, which are not directly related to formal markets. The second criterion distinguishes the economics imperialism on the basis of methodologies. The old economics imperialism (the name of which arises from the fact that it was chronologically first, but this type of research is being continued) uses a methodology of the neoclassical economics, with the assumption of stability of preferences or effectiveness and market balance. Thus all areas of life are analysed as if they were markets. The main representative is G.S. Becker, who analyzed law this way. On the other hand the new economics imperialism is related to new institutional economics and its methodological approach. Thus, different behaviours of people are treated as a response to imperfections of markets. The main advocate of this approach is B. Fine. In the last part of the work we show that despite some success of economics imperialism such as finding new correlations or explaining some behaviours, it is criticised. Most of the criticism is related to the lack of satisfying the conditions of reasonable unification of science according to which first, a new, unified theory should explain all problems, which are explained by earlier theories and, second, phenomena which are discussed by this theory should result from the impact of the same real factors on them. Thus, t