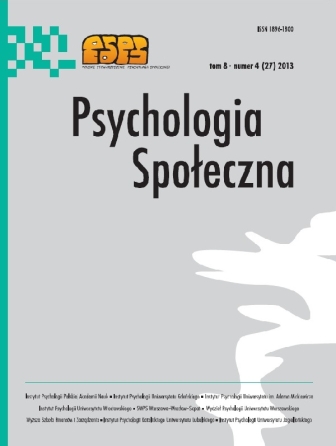 Summary/Abstract: In the contemporary psychological literature there is a growth of research concerning perception of partner’s empathy, considered to be a factor that influences quality of romantic relationships. Referring to social exchange theories and the emotional-cognitive model of empathy, studies were designed in which 185 couples (370 participants), including 100 engaged and 85 married (for a short period of time) couples took part. The main aim of the research was to analyze the association between the perceived empathy of partners and their relational satisfaction and self-empathy. The conducted research allowed for exploration of the role of empathy for relationship satisfaction in rarely analyzed groups of couples that experienced transition to marriage or were in the first stage of family life cycle. Results indicated that the perceived partner’s empathy (especially male empathy), was a significant predictor of relational satisfaction among couples. Women were viewed as more empathic than men. Perception of high empathy was associated with higher self- empathy of both partners – the perceiver and the perceived. Couples displaying comparatively high, mutually perceived empathy, were significantly more satisfied with the relationship than those who differed in this respect or were low empathic.