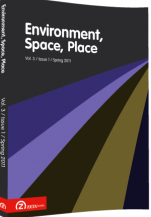 Summary/Abstract: This article examines Heidegger’s account of dwelling while placing it in the broad context of a wide array of his lectures and the constellation of his collected writings. The focus on this question is primarily ontological in character, in spite of the spatial significance of the phenomenon of dwelling, and the bearings it has on a variety of disciplines that interrogate its essence, be it in architectural humanities and design or in geography, which probe the various elements of its architectonic and topological underpinnings. The investigation of Heidegger’s reflections on dwelling will be connected in this line of inquiry with his consideration of what he refers to as “the gathering of the fourfold,” namely as “earth, sky, mortals and divinities,” and the manner they are admitted and installed into “things,” all to be set against the background of his meditations on the origins of the work of art, and on the unfolding of the essence of modern technology as en-framing.