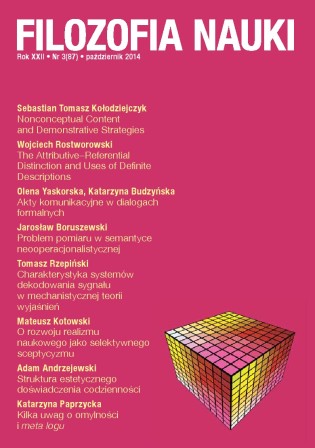 Summary/Abstract: The paper discusses various uses of definite descriptions. The aim is to demonstrate that the commonly adopted Donnellan’s dichotomous division into “attributive” and “referential” uses is inadequate. The uses of definite descriptions exhibit a significant variety and do not constitute two homogenous classes. In particular, there are uses which have some features of both referential and attributive uses. These are the cases where the speaker’s use of a description rests on some causal links to a particular object – like in the case of referential uses – but the speaker intends her audience to make an independent identification of that object, which is characteristic of the attributive use. Such uses match Ludlow’s and Neale’s characterization of the specific use of indefinite descriptions. At the end of the article, the author briefly considers the impact of his observations on the widely discussed issue of a proper semantic theory of definite descriptions.