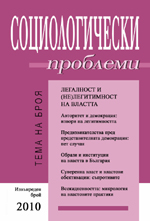 Summary/Abstract: The point of departure of this article is Hannah Arendt’s view on authority, according to which the authority is a historically unique phenomenon, characteristic of the ancient Rome. Hence the authority disappeared with the decline of the Roman Empire. On the basis of the nonpolitical forms of authority, which Arendt regards as inessential, I analyze the semantic structure of the concept of authority and formulate a broader understanding on authority. In this analysis I use the distinction between „epistemic” and „deontic” authority, which allows us to see the ambiguity of this concept. After that I present in general outline the critique on authority by the philosophy of Enlightenment and the contestation of this critique. Finally I formulate a general understanding of authority, which applies to the political authority in the modernity as well. Its core is the proposition that all at least modern authorities in politics are provisional and contestable.