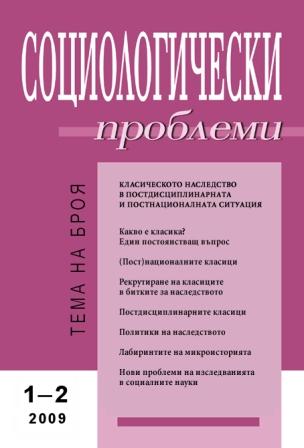 Summary/Abstract: This paper analyses the conditions of the importation and fabrication of the work of Max Weber in French sociology after the Second World War. Given the central place of „Weber“ in US sociology and the force of attraction exercised by US sociology upon French sociologists in the 1950s, one could expect that the German author would almost naturally have become the most legitimate reference in French sociology. However, the actual reasons why Weber quickly achieved the status of sociologist par excellence are to be found rather in the specific social, political and intellectual conditions in the context of the institutionalization of French sociology around 1960. The sociological sanctification of „Weber“ became possible especially due to the positions, dispositions and the specific history of Raymond Aron, the agent of the importation of Weber’s work, and to Éric de Dampierre; since 1952 they strove to introduce „anticommunist“ references into the French social sciences. Moreover, a closer look at the different uses of „Weber“ in the Revue française de sociologie in the 1960s seems to show that the attraction for referring to the German author diminished progressively with the growing prevalence of quantifying empiricism in sociology. Hence, the case of „Weber“ in France demonstrates that the „theoretical use“ of an author might be a symbolically efficient instrument, but it is only through an „empirical use“ of the work, a use that aims to mobilize it for a more complete explanation of social phenomenon, that the relevance of sociological production vis-à-vis other forms of cultural production can be proved and its autonomy effectively claimed.