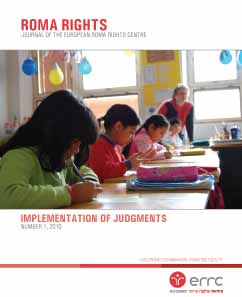 Summary/Abstract: On 15 February 2007, the European Court of Human Rights (ECtHR or the Court) established for the first time a violation of Article 3 of the European Convention on Human Rights (ECHR or the Convention) by Macedonia in connection with the police ill-treatment of Mr Pejrušan Jašar, a Macedonian national of Romani ethnic origin, and the ensuing lack of effective investigation. The Court later reiterated the main findings from the Jasar case in two subsequent rulings involving Romani victims. However, the positive ruling for Mr Jašar and the condemnation of Macedonia by Europe’s ultimate human rights court brought no change to his personal circumstances. Not even nine months had passed from the time of the Court’s judgment before he was again physically abused by police. The years following the Jasar judgment saw some improvement in law, but the legal changes and actions of the authorities have not reduced significantly the problem of ill-treatment of persons by law enforcement officials and have not effectively addressed the phenomenon of the latter’s impunity.