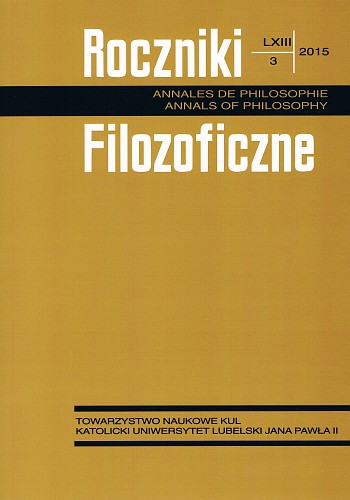 Summary/Abstract: The main goal of this paper is to explicate the meaning of such words as “reason”, ”knowledge” and “faith.” In addition, some relationships between these notions are analysed. Two attitudes can be distinguished: “faith — reason/knowledge” and “reason/knowledge — faith”. In the first case faith is initial, but a believer can take a rational (intellectual) effort to analyse what faith is. The second attitude is realised in the rational search to find faith. Many different types of arguments for the sentence “God exists” have been invented over years. These arguments have been the tools used in the cases of both attitudes. The arguments are analysed and discussed. The notion of argument is related to the notion of persuasion. Some different situations can be distinguished: a claim is rightly argued and somebody is persuaded by this claim; a claim is rightly argued, but somebody is not persuaded; a claim is not rightly argued, but somebody is persuaded by such a claim (e.g. by an influential leader); and a claim is not rightly argued and somebody is not persuaded. The attitude “faith — reason/knowledge” (a religious attitude) is existential and practical. It consists of some components. One of them is a rational religious belief — a religious knowledge (doctrine). If a believer confesses his or her faith using the official (institutional) text — called in Latin Credo (The Creed) — then really they believe and accept a set of claims, which belong to the religious knowledge (doctrine). A religious faith, understood as God’s influence, is acknowledged as the basis for such an act of believing and accepting. So the religious attitude consists of a religious faith, beliefs, emotions and also free choice (decision, acceptance). The act of an acceptance does not only concern beliefs. A believer also accepts moral and religious rules (principles). This is the type of morality motivated by religion. A religious attitude is the rational, theoretical and practical synthesis all of these components.