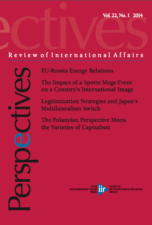 Summary/Abstract: This article explores the European Union’s energy relations with the Russian Federation through the prism of the political discourse by trying to identify its most salient formations, which respectively center around three concepts: 1) integration, 2) liberalization, and 3) diversification. Building on a detailed discourse analysis of 176 statements and documents produced by EU leaders and institutions, the article focuses on a) the common and the differing aspects of the three concepts, b) their major themes, c) the perception of Russia on the part of the EU, and d) the way the norms and values of the EU relate to its identity and its effects on EU interests. The bulk of the documents used in the article covers the period of the so-called first Barroso Commission, which lasted from 2004 to 2009.