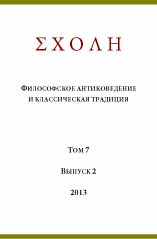 Summary/Abstract: The Socratic dialogue Hipparchus is the one of the earliest texts in which the philosophical concept of value is separated from the economic concept of price. This dialogue is devoted to the theme of the profit, but actually this economic issue is discussed in the context of ethics. The Greek word ἀξία is used here to denote the economic value and functional applicability of things. Axiological meaning of this term in the dialogue arises in the process of talking about relative price of gold and silver. Socrates and his friend sequentially determine the value through the concepts of profit, benefit, utility and good. The presence of indifferent things (ἀδιάφορον), which are discussed by Plato in the Lysis, Gorgias, Euthydemos and other dialogues, is not designated in this dialogue, but it is assumed in the context.