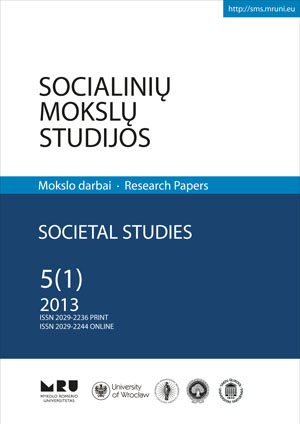 Summary/Abstract: This paper criticizes the realistic approach to international relations. Due to the essence of the main categories of realism (such as state, sovereignty, nation), the realism paradigm is presented as non-optimal and defective, and it is explained by interpretation of the social contract. Following the latter interpretation, the social contract does not eliminate anarchy completely and anarchy can still appear at the international level. Because of the globalization processes, the world has grown tiny and the states are closely interrelated, this means that in the 21st century for an individual international anarchy is as dangerous as anarchy on the state level. For this reason the national state becomes a source of insecurity for the individual and, therefore, the transformation of the state becomes a necessity. This paper supports the statement that the international order should be organized by creating global and unified governance. The European Union has introduced a most impressive integration project, which has the potential to establish a political unity not only in Europe, but also in the whole world. Since a sudden transition from one status (national state system) to another (supranational global governance) is hardly possible and the consequences are unpredictable, a gradual transition is recommended and it is more in favour by the EU. In other words, the EU integration process is a strategy aimed at “destruction” of the national state, which seeks full compliance with the terms of the social contract and the complete elimination of the anarchy. This strategy might be a new task or function of Europe.