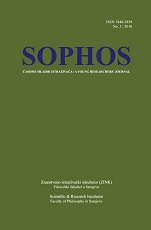 Summary/Abstract: The lens of the photocamera, which in the middle of the 19th century represented a threat of overcoming the art of painting, at first faced hard critiques which often rejected and even ridiculed this mechanical art. However at the beginning of the 1920’s, photography started to take roots in the printed media, and by the end of the 1940’s it had become an important medium of historical documentation. Thirty years later it appeared to be an instrument for revealing reality, while on the other hand retained the power to shock the eye of the beholder with its pornographic images and pictures of terror, and the power to limit the beholder’s opinion by arranging its own content. On the basis of the film Blow-Up, in this text I discuss the role of a photographer during the act of taking photos. I also discuss the subjective / objective reading of a photograph, as well as the mediatory / historicaly conditioned changing of perception.