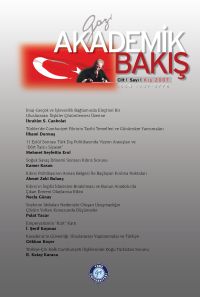 Summary/Abstract: The academic, political and economic milieu always emphasize that Turkiye is the part of the Western civilization. Turkiye’s influence on Asia ruled out this idea till the end of the Cold War. The independence of Western Turkistan republics, the September 11 attacks and Asia’s permanent growth affected these environments. On the other hand, most of the studies concerning the regional power in Asia and promising global power, China, are economical. Turkish public opinion is not interested in any other issue. The main issue on the agenda of the relations between Turkiye and China is the status of Uygur Turks.