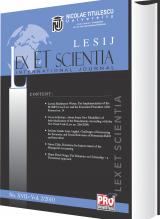 Summary/Abstract: The latest four decades have marked by their width, speed and radicality a true “revolution” on the financial market, a transformation and restructuring of financial services, of financial instruments which were used, of transaction systems, but also of competitive processes. The importance that should be given to such transformations of financial systems is given, as well, by their impact, both at the micro- and at the macro- levels, on the economy as a whole.The evolution of the European financial market at the beginning of the 21st century has followed the general trend of global markets. As a main tendency of financial market restructuring at the European level we should keep in mind the fact that there was an opening towards private financing according to the American model, due to the necessity to attract international capital resources, a process which is still ongoing.The integration of the European financial markets at the beginning of the 21st century follows the general process of financial globalization which develops rapidly on several structures of financial systems.