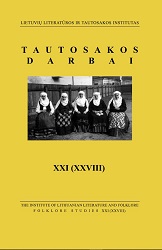 Summary/Abstract: The author of the article aims at discussing particular episodes in the folk songs’ discourse, characterized by peculiar symbolism. These include scenes displaying meeting of the two young people by the water and some adventures they happen to experience there, quite common in Lithuanian wedding songs, love songs and some other types of folk songs.When extracted from the 19th century printed sources and systematized, these folk song motives alone unexpectedly reveal themselves as an impressive ritualistic and mythopoetic mystery, existing exclusively in folk songs and narrated in an archetypical language. The following scheme reveals the general contents of this mystery. The maiden and the young guy happen to meet by the water; the place may be characterized either as the usual ethnographic landscape, or its mythologized version may be presented. During this meeting several fatal events are bound to happen. Their narration, however, may proceed in two slightly different ways. The first one includes motives signifying loss of symbols and signs, associated with youth and maidenhood. Here are the several typical versions: the guy seduces the maiden, “over persuading” her, and her wreath withers, also the water clouds up – the maiden weeps; the guy asks the maiden for the water for his horse, and as she does not give it, he forcefully tears off her wreath, strips down the ribbons, breaks the buckets and the yoke – the maiden weeps; the maiden’s wreath gets blown away into an open sea, her ring or even herself are drowning – anyway, she asks the guy for help, agreeing to marry him, while the guy sometimes refuses to help, but more often he attempts at saving the above mentioned things and the maiden: sometimes he succeeds, but gets drowned himself, and the wreath either floats away and out of sight or gets carried away by the swans – the maiden weeps. The second line consistently develops the theme of crossing the waters to the other side. The guy and the girl are initially on the different sides, so several ways of crossing the waters may be employed: the guy either attempts at swimming across on his horse, or makes a ship in order to reach the girl and bring her over, or builds a bridge; the maiden either asks a ferryman for help or attempts at wading the waters over by herself – anyway, she always fails and weeps as a consequence...