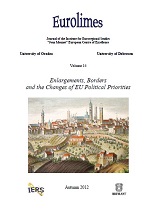 Summary/Abstract: The need for a European police and judicial cooperation system has been a major concern for all European countries involved in the integration project. Since the informal establishment of the TREVI Group it was clear that among the positive effects of integration and free movement of people, different security challenges for internal security of the CEE/EU had to be approached within coherent common policies. The Schengen Agreement and the instruments developed within the former Justice and Home Affairs pillar of the EU, as well as the emergence of specialised agencies (EUROPOL, FRONTEX) indicates that internal security of the Union represents one of the main challenges for the future. Our contribution within the conference will emphasize the importance of the transition from an intergovernmental approach of police and judicial cooperation toward to a trans-national and cross-border approach. The variables proposed for the analysis includes EU legal framework, Schengen aquis, and their effect upon the national legislation in the member states, emphasising the importance of the new instruments for cross-border police and judicial cooperation.