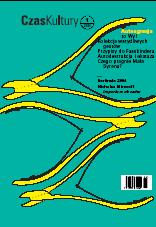 Summary/Abstract: Joanna Bator’s short story Bydlądynka deals with the ancient problem of male and female relationships. The main character is a dyed blonde with big breasts who wears underwear with a leopard pattern for special occasions and who overindulges in food and buying new clothes. Her existence focuses around dating a musician who is frustrated and unappreciated by critics. Waiting for his phone call fills the emptiness of her spare time. The naivety of the main character makes her ignore the aggressive behaviour of the egocentric artist. Although he causes her physical and emotional trauma she is persistent in being charmed by his artistic “nonchalance”. Her way to overcome the tension resulting from the relationship is consuming the contents of her refrigerator. One of the unfulfilled expectations that her life concentrates on becomes the turning point of the story. This is the prospect of spending Christmas Eve together and the hope for a real declaration of commitment. The intentional exaggeration of the main character’s image by the author reveals the truth about women’s susceptibility to masochism. The literary fiction depicts the actual threat of toxic relationships, being addicted to a man and losing the sense of one’s own “self”.