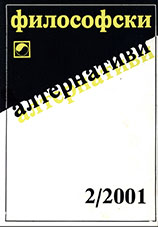 Summary/Abstract: The subject of the paper is the notion of the Stoics about time which anticipates in many respects а number of modern treatments of the problem of time. The exposition of the paper rests on the brilliant book of prof. S. Sambursky "Physics of the Stoics", Greenwood Press, 1973. In Antiquity it is the Stoics who have developed а satisfactory theory about the structure of time due to their dynamic notion of the concept of continuity. А cursory comparison is made in the paper with other ancient conceptions about time (first of all with Aristotoles's one) and it is made а remote analogy with Newton's idea about the relative time keeping in mind however that time is for the Stoics, in contrast to Newton, inseparably connected with events. Some similarity is perceived a\so with а passage of Kant's "Critique of the pure reason" and with the ideas about time expressed in the theory of Whitehead. In genera\, that which distances the Stoics from their contemporaries and which makes them closer to а number of modem philosophical notions about time is а result of the difference between the ordinary for the Antiquity static notion of the concept of continuity and the dynamic one of the Stoics.