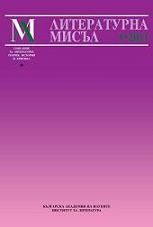 Summary/Abstract: The paper explores the biography of Assen Christophorov (1910 – 1970) – an eminent Bulgarian economist and author. After completing the full course of Robert College in Istanbul (1931), he graduated as Bachelor of Sciences (Economics) from the London School of Economics in 1934. Back in Bulgaria, Christophorov built a solid reputation as one of the leading economists during the inter-war period. He made outstanding contributions to the fields of business cycle studies and theories, monetary economics, finance and the economics of war. In 1947 he was suspended by the communist authorities and forced to abandon his university career. During 1951 – 1952 he was persecuted by the regime’s police and interned to a labour camp. Afterwards Christophorov devoted himself to freelance literary activities. Author, in 1945, of an acclaimed book, narrating his student’s life in London, he published various novels and short stories. Concurrently, he was a prolific translator of English and American authors. The paper draws from archival sources and, in particular, from the recently opened files of the communist regime’s secret police, gathered during Christophorov‘s imprisonment and the long period of surveillance that ensued. The focus is on his life during the 1950s and 1960s and on the compromises he had to face in order to pursue his intellectual endeavour. Christophorov is considered an insightful case of successful intellectual “conversion” that permitted him to abandon a strictly monitored ideological field (economics) and migrate towards a subtler one (prose) where certain freedom of expression was somewhat easier to achieve. A counter-factual exercise is designed: Christophorov’s hypothetical trajectory as an economist in a “free world” is contrasted with his tangible accomplishments as an author in the communist realm. It is inferred that the biographical disruption in 1947 released another talent that gave birth to remarkable pieces of belles-lettres.