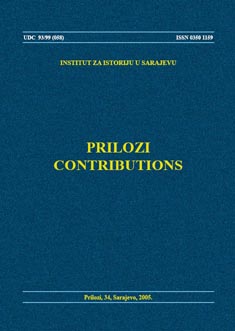 Summary/Abstract: Finding itself incorporated in Austria-Hungary, Bosnia and Herzegovina shared the unfortunate fate of the central powers during the First World War. Being the poorest part of the dual monarchy – it could not take care of its grain needs even in peacetime – Bosnia and Herzegovina had severe food shortages during the war because of military requisitions, the draft of a large number of working-age men, and the devastating effects of war in the region, particularly the great drought in 1917. Government measures to procure food for the population did not alleviate the matter. The food shortages led to exceptional price inflation, and average earnings did not follow suit. Although the government set maximum prices for the most important food goods at the beginning of the war, various speculators and smugglers easily broke these regulations. All kinds of thieves emerged. Citizens were constantly exposed to different robberies and scams. As the standard of living drastically declined, the Austro-Hungarian bureaucracy in Bosnia – a pillar of the Monarch’s administration – grew inclined to corruption. The possibility of getting rich overnight not only attracted various merchants, but also some high government officials who found themselves on trial during the war.