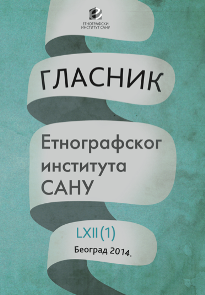 Summary/Abstract: The paper deals with the f﻿irst Drežnica gathering held on November 17th 2012 at KPD ’’Jedinstvo-Egyseg“ facilities in Bajmok, Bačka. The gathering was held on the 67th anniversary of the settling of the people from Drežnica and other places in Gorski kotar in Bajmok. The day of all Drežnica people migrations was celebrated on this occasion too, starting from the moment when the Serbian population began to inhabit the Ogulin-Gomir region and the Drežnica area in 1600 and later. The gathering has the elements of national, regional, and cultural identity. It also indicates the belonging to the Serbian people and Orthodox faith, the life on the borders of Gorski kotar and Lika, and the songs and dances from these parts. All the above mentioned elements of the gathering are more or less visible indicators of identity. In contrast to this, there are some elements of identity which cannot be seen at the gathering, but which are present in the participants’ consciousness. It is actually a regional identity, that is, the attitudes of the Drežnica people concerning the regional belonging of the Drežnica parts. According to some opinions, the Drežnica area is historically, geographically, culturally and administratively tied to Gorski kotar. They are the people of Drežnica and Gora and their number is quite significant. According to others, whose number is much smaller, Drežnica is a special and self-sufficient area which exists independently of other areas. They are the people of Drežnica. The third group, the younger generations in Bajmok, claims that Drežnica belongs to Lika. They think of themselves as the people of Drežnica and Lika. They seem to be a majority. By all odds, this opinion came as a consequence of the generation gap between the older and the younger generations, parents and children, as well as the migrations with which many cultural roots were pulled out. It also came as a consequence of the influences made by the native inhabitants, the Bunjevci, Croats, and Hungarians, on the newly settled Serbian population, who probably just returned the information received from the colonists about their ancestry to them. So, the basic question for further wider researches on this issue, to which a special attention should be paid, is what makes the people of Drežnica identify themselves with Lika.