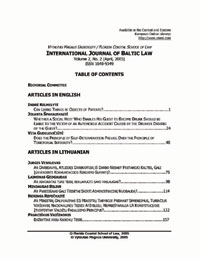 Summary/Abstract: The Church being a sovereign institution has it’s own law, which regulates it’s internal and external life. This law is called Canon Law or the Church law but these names are not the same. The Church law consists of Canon law, the activities of the Church, and human legal norms declared by legislator. This article presents – perhaps, first time in Lithuanian – the separate and unique system of Canon Law. The author of the article analyzes the sources of Canon Law and the structure of the Code of Canon law. The sources of Canon law are many various documents, their compilations, issued in various ages. The most important of documents is the Code of Canon Law, the first variant of which entered into force in 1918. Nevertheless, as the political and economical realities in the 20th century changed rapidly, the Code became unfit to solve various problems, which arose inside the Church. Therefore, it was decided to renew the Code. The process of renewal lasted for twenty years and in 1983 the Renewed Code entered into force. The author states that the current Code is the most important source of Canon law today. It consists of seven books and has 1752 canons. Nevertheless, other sources do not cease to be important, especially from the historical point of view. And it is hoped, that as there is much of investigation in this field in the World arena, texts in Lithuanian – which are now very scanty – will also appear soon.