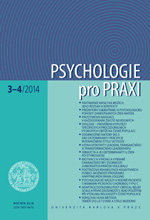 Summary/Abstract: The paper presents basic findings on the prevalence of intimate partner violence experienced by Czech men. A representative sample of Czech men (N = 1001, quota sampling) has been subjected a standardized interviews (CASI) at the turn of 2012 and 2013. The lifetime prevalence of physical violence in a relationship is 10% and 5% during last five years, much of the physical attacks come from strange men outside the family. The events are perceived as relatively serious, the other issue is the relatively high prevalence of other forms of psychological violence or abuse, of which men do not differ from women too. The effect of the typical risk factors on the partner side (alcohol, drugs, aggression, partly social status) was confirmed as well as the influence of patterns transmitted by the family. Protective effect of the self-control on the part of partners was also approved.