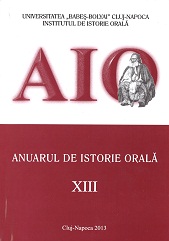 Summary/Abstract: St. Ana - Rohia Monastery from Lăpuş District (Maramureş) is one of the well known monasteries of Romania, as a place of culture and prays. The aim of this study is to reveal the history of the monastery (during 1923-1989) as it is remembered by Octavian Gherman (the son of the builder), archbishop Justinian Chira (the abbot of the monastery during 1944-1973), father Serafim Man (the abbot of the monastery during 1973-1984) and father Nifon Petruş (former monk at Rohia, arrested in communism). Important moments are related in these interviews such as foundation, construction and dedication of the monastery; life at Rohia between the two wars; consequences of Hungarian occupation and the communist period; the presence of Ioan Alexandru and Nicolae Steinhardt at Rohia.