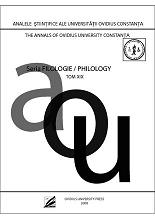 Summary/Abstract: Freud was obsessed with the ancient myth of Oedipus, mainly with the episode of Oedipus’ encounter with the Sphinx. He surrounded himself with ancient artifacts representing the hybrid, and consequently monstrous being whose enigma he tried to answer all his life. Reading critically fragments from Freud’s The Interpretation of Dreams I will try to analyze his rhetorical strategies, on the one hand, and the way in which they have been received by his commentators, on the other, in order to demonstrate that he was closer to a literary critic than to a scientific researcher. His major “discoveries” such as the interpretation of dreams, the theory of the Oedipal complex and infantile sexuality, the inquiry of the unconscious, use literature to substantiate his interpretations. I will also examine contradictions of his text and I will record its most authoritative critiques.