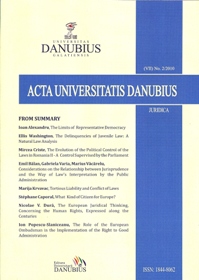 Summary/Abstract: The jurisdictional review, a control carried out by an organ independent in relation to the legislative, seems definitively won for the constitutionalist world. In the absence of expresses dispositions that regulate the control of constitutionality, the judiciary decided that this right belong to him in a very naturally way, as an issue of the separation of power and of the function that he fills. Because he was controlling the acts of the Parliament, the judge won a strong position in relation to the legislative power. This situation could not be accepted by a powerful legislative. While presenting itself as mandatory of the sovereignty of the people, it claims for him the right to control his own acts. However, in the case of Romania such a manifestation demonstration intervened only in Communist period. After we have presented in a first part the conditions in which the constitutional review is passed to the political, the second part of the article will present how this control is exert by an organ dependent to the Parliament.